Here we are again. I drew some folks. Here they are. This isn’t “ET with quarantine hair,” though I get where you’re coming from.

Neither is it Bjork, Ellen Page, or “Rooney Mara, except I don’t believe you would know who Rooney Mara is.”

Friends, I do know who Rooney Mara is. Someday I will draw her.

But for today, I have drawn someone who is not:

No, friends, as MANY of you correctly guessed, this week’s subject was Greta Thunberg, or, as one of you so elegantly put it, “Greta Thunberg, assuming that little pooplet on her shoulder is in fact a braid.”

Friends, the pooplet was as advertised. Next I went here. I knew it wasn’t wise, but I couldn’t help myself. Again, you did well. (Which means I did well.) MANY of you correctly guessed this person’s identity. But some of you did not.

For example, this person is not

No, friends, as plenty of you saw, plain as day, I drew Andrew Cuomo. Next up is my latest shame. Why is it that the loveliest among us are the most difficult to accurately depict?

I predict I’ll lose a handful of friends when you discover who I’ve drawn. First off, none of you guessed correctly. My bad!

But your range of wrongness was truly impressive.

Nor was my subject:

Wait, but Lo! One of you DID guess correctly. My bad! Oh wait! TWO of you!

But the winner really drove it home with:

“Lisa Kudrow after giving her rhinologist $500,000 & telling him she wanted her nose “more Picasso.” I do think I got the nose right. Or right-ish. Or at least right-er than I might have.

No matter. Let us move on to brighter skies. Here’s where I landed for subject number four. An overwhelming number of you agree that I have drawn a very fine portrait of John Kraskinski.

And I agree! IF I had been trying to draw John Krasinski.

Before moving on from you John Krasinksi conspiracy theorists, I do want to honor a few guesses that delight me (I find your misbegotten confidence so endearing):

Hm. Sorry, but you are wrong.

ONE blessed soul among you guessed “Wolverine,” which I take as ironclad evidence that I have successfully rendered Hugh Jackman. And now, for the bonus question:

Bonus Question! If you were in court for disturbing the peace (streaking down the middle of Main Street at noon on a Thursday), who would you want to be your lawyer and why?

Here they are again. 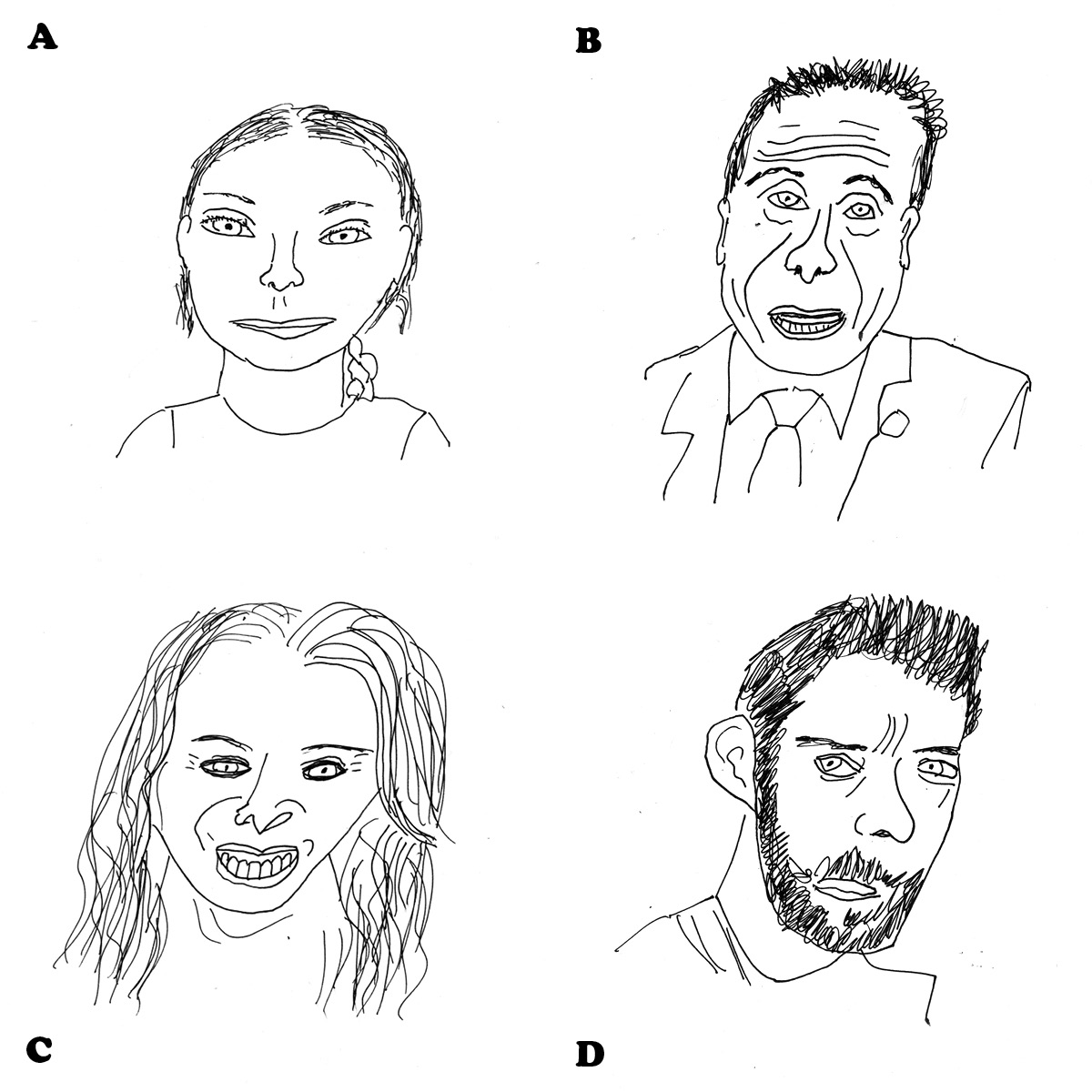 Here’s what you had to say:

Thank you all for making me laugh, Friends. I only hope that I have managed to return the favor.

I consider Matthew Draws a success if 1) most of you guess wrong, yielding an avalanche of misbegotten delight, and 2) the subject of every drawing is correctly identified by at least one of you (the baseline validation I need to keep on drawing).

Which is to say, I’ll be back in a few weeks with Matthew Draws 52.

Perhaps I will draw Rooney Mara. My guess is that she would end up looking an awful lot like John Krasinski.